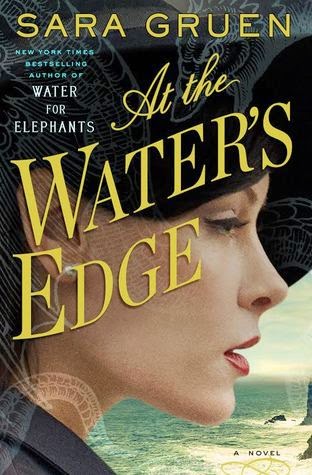 This review was originally published 3/12/15.

*I was given an Advanced Release Copy of this title by NetGalley in exchange for an honest review, find At Water’s Edge on shelves everywhere March 31st*

Well everyone, I think that I have a new love. Sara Gruen truly captured my heart with Water For Elephants, but I will admit she and I are back in a love-love relationship with this book. Immediately, I realized that I wasn’t going to be entertained with fantasies of circuses and performers. This would have disappointed me, if my curiosity wasn’t quickly sparked with the discovery that I’d be reading about the Loch Ness Monster.

The story opens on three financially privileged young adults getting roaring drunk at a war time New Year’s Eve celebration. Ellis and Hank have been left behind from the war. Ellis for being colorblind, Hank for his flat feet.

“If Hank was Clark Gable, then Ellis was a towheaded, clean-shaved Errol Flynn.”

Ellis and his wife Maddie are quite disappointing to Ellis’s father, a former army Colonel who has his own shame to handle on top of his son’s failure to serve in WWII. After an explosive argument between the hangover son and easily angered Colonel, newly cut-off Ellis decides that the only way to regain his father’s approval and money is to right his family’s name.

The Colonel, like many people at the time, became swept into the whirlwind surrounding the Monster at Loch Ness and after returning with photographic evidence was branded a phony and forger. Ellis and Hank decide that they’ll achieve adventure and succeed where Ellis’s father had failed—by finding emphatic proof that the monster exists. The trio make their way to Scotland quite literally in the middle of the war.

Maddie is miserable, angry, and hopeless when they finally arrive to Scotland. After witnessing injured soldiers being pulled from the ocean after a German U boat attack, we find that Maddie truly begins to stir from her old life. It becomes apparent that her husband and his best friend will forever prioritize hunting the monster without regard for what Hitler and the Germans are causing. Throw in the ladies that Maddie befriends at the Inn the trio are residing in, and the handsomely mysterious Inn Keeper and you have a lovely romance tale.

Was this as amazing as Water For Elephants? No. It was an amazing historical novel with many elements that I adored reading. Sara Gruen does a lot of things very well in this novel. One of them was transporting the reader to another time and place entirely. Evoking my curiosity for cryptids and old Scottish Inns. If you like a little romance and drama with your historical fiction, than I highly suggest you pick up a copy of Sara Gruen’s At the Water’s Edge as soon as it hits shelves later this month.

Thanks, NetGalley for giving me an ARC of this title in exchange for an honest review!