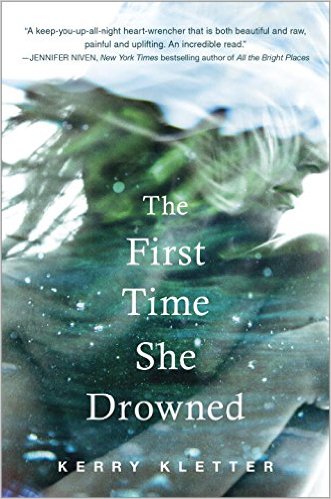 While this book is one of fiction, Kerry Kletter weaves so much realism into the pages that at times it was hard for me to distinguish that this wasn’t happening in real time to someone that I cared about–or myself. To be able to write such a realistic portrayal of depression, suicide, abuse, and so many more triggering topics with such beautiful language is what will set Kerry Kletter on the “must read” shelf at every book store this summer. I found myself continually comparing Kerry Kletter to Jandy Nelson, author of I’ll Give You The Sun in the indescribable way that she paints such violent events with such  beautiful words.

To say that I gorged myself on this title would be slightly under-kill. I didn’t just read The First Time She Drowned, I breathed it.

I can’t begin to recommend this book enough to young adults, old adults, in-between adults, daughters, mothers, fathers, and anyone with a pulsing happening in their chest.I firmly believe that you should take a moment to step back and place it into your Amazon cart, immediately.

“We are given our roles so young.”

With just those seven words I felt like Kerry Kletter, Cassie, and I were the same person. How true.  I’ll never forget coming to the halting realization that people tend to assign us to the person we are at our worst. Cassie came to that realization much too young. The vast majority of us go through our “worsts” in adolescence. Fortunately for us, our roles are assigned only as a title. Something likely spoken about among family behind closed doors, or whispered conversations overheard in hallways. Unfortunately for Cassie O’Malley, her role was much more than assigned–she was branded.

Cassie is not just struggling to figure out who she is at eighteen, she is trying to figure out exactly why her mother has had her imprisoned in the mental institution–where she has been held for almost three years. Cassie isn’t just wondering how she’s going to fit all of her shoes into the tiny dormitory closet on move in day,  she’s trying to figure out how she will assimilate into the “real world” outside of the hospital walls, on top of remembering where her classes are on campus.

Maybe going to her self-indulgent mother’s alma-mater will help bring the two of them together, finally. Even after all of the wretched histories and ugly words shared between the two of them (did I mention she lied to get her daughter accepted as inpatient at a psych hospital?), Cassie still has the yearning for her mother to want to know her.

College isn’t going to be the fresh start that Cassie and her best friend, James, had spent imagining for her. She isn’t going to escape the thoughts, memories, and nightmares that have been terrorizing her for years. She is going to mess this up. Several times. Because Cassie O’Malley doesn’t have it all figured out. When her mother shows up on campus, almost as though out of thin air, Cassie thinks she might finally be able to piece herself together again.

Cassie has a love/hate relationship with bodies of water. She hasn’t just drowned once, but many times. Whether her literal drownings (again, many times) or the figurative drowning of her very soul by the mother that so selfishly blames her for everything wrong in her life. Cassie is continuously struggling with the exhaustion accompanying the everyday fight against mental illness, and wanting to give up. Letting the waves consume and devour her, finally just giving her some much deserved peace. While the large part of her that knows drowning would be lovely, there’s the fighting instinct, and driving need to repair herself and be her own lifeguard. As much as Cassie wants to hate her mother for so many things, her father for allowing so many things, and her brother for watching so many things–she can’t. She can’t fight the pull of her mother, who like the ocean, has a way of pushing and pulling Cassie beyond what she can ever control.

From the way that Cassie forms friendships, finds out what a kiss feels like, risks teaching herself to trust, and finally unearths her deepest and darkest moment of her childhood–I was there. Kletter uses words like we earthly folk never could. Fluidly, and with a great responsibility to tell the story of Cassie authentically. Kletter proves without a shadow of a doubt, that “YA” should be retitled “All Humans”.

I read this book for my traveling book club, and it’s on the way to NYC with roughly 50+ flags and hot pink post-its creeping out of the binding for the next reader, Katie! Here are a few of my post-it note transcriptions through the book, or passages I highlighted:

OH MY GOD, I HAVE NEVER HATED A FICTIONAL HUMAN BEING AS MUCH AS I CURRENTLY HATE MRS. O’MALLEY.

“It didn’t take much longer for them to tell me their own reasons for being there–stories that, in the mere hearing of them, made me older than I was ready to be.”

James? He’s Cassie’s anchor. We all have that ONE person that we reference ourselves against. The person that has it together. You know they have it all figured out. If they can’t make it, how can we have a shot in hell to make it?

Holy mother of social media heavens, she commented and referenced MY CRONUT.

Oh, Cassie gets me. I don’t think anyone has ever described what having anxiety or panic attacks is like quite like her. 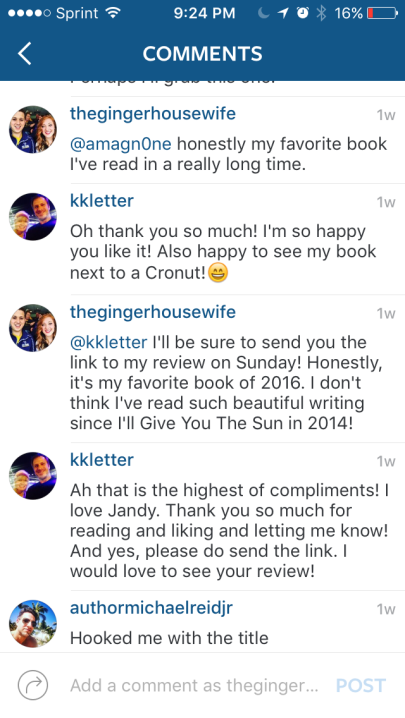 “As soon as I start thinking about the panic killing you, I start to panic.” –Clinical definition of panic attacks, probably.

“Anxiety kicks up like dust, making the air thick to breathe.”

Seriously, it’s like Kerry Kletter is in my brain right now.

“AHHH, Kerry Kletter liked another of my Instagram photos, are we officially “friends” now? We are, I’ve decided. That’s totally how social media works, right?”–Conversation I legitimately had with my husband. 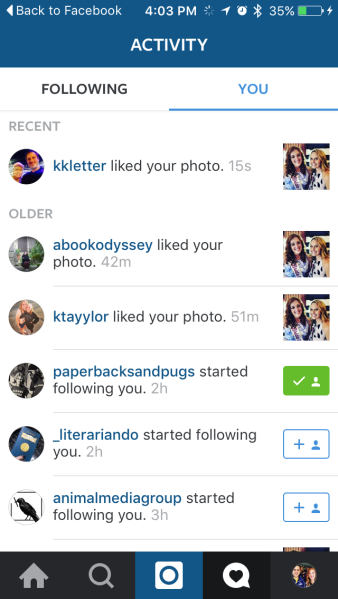 Ugh Pete and Bevy sound like the absolute worst people in existence. Misery loves company, but I feel like no amount of misery could be manifested in one body aside from Mrs. O’Malley.

I sense so much “Bates Motel” vibes from Matthew and Mom’s relationship.

Did her mother just BLAME her for the reason she’s cheating? What in the actual world of all things living?

I may hate Aunt Dora as much as I hate Mrs. O’Malley. Wait, that’s not possible.

In my mind–Aunt Dora looks like Harry Potter’s Aunt Marjorie. See photo below for reference.

Wow Aunt Dora, just when I thought you and Bevy weren’t both evil hussies–there you go making trailer jokes.
No. James. Just no.

Zoey. I effing love you, Zoey. Zoey is my third favorite.

Aww, Gavin and Cassie together again.

I had so many more post-its littered with four letter words geared towards Mrs. O’Malley, Aunt Dora, and so many other things–but I want to know what YOU thought of the book!

One of my favorite movies of all time is Girl, Interrupted staring Angelina Jolie and Winona Ryder. Personally, I recommend that you screen the film after reading the book just to have something to compare with this work of art. While Kletter does more than enough to vividly paint exactly what Cassie O’Malley’s life has been and is, it was fun to be able to draw connections between the two pieces of media while I read.

One thought on “The First Time She Drowned by Kerry Kletter: Review”

Follow The Ginger Housewife on WordPress.com
Happy Valentine’s Day to all my loves. 🥰♥️🥂
I was so worried about my heart making room for her brother. I’ve always said that my daughter is the most special of a blessing. I’ve said it so many times and it sounds like a cliche or like I’m a robot, but it’s true. She’s my world. And everyone told me my heart would make room, and weirdly enough-it did. @kimhockmanphoto captured all her sass and sweetness and my Mama heart in this picture, and I will love it forever. I think one of the hardest parts about being a parent is that just when you think you’ve got it down, they grow into a new version of their person and you’re scrambling to catch up and adjust your “A” game. I feel such a responsibility to instill good values within her little soul. I want her to to be polite and kind. She needs to have discipline, but know grace and forgiveness. I want her to love herself like she loves others-unconditionally and recklessly. I want her to know she’s limitless and intelligent and that with her Mommy and Daddy forever in her corner the risk of failing shouldn’t scare her from trying, ever. #MartinsburgMamas #Motherhood #WVMoms #parentingishard #GirlMom #GirlMomLife #WinkNaturals #toddlerlife #littlewomen #girlpower #martinsburgwv #BerkeleyCounty #raisingdaughters
Oliver turned one week old Tuesday! He’s having longer awake stretches and is an excellent sleeper. Unlike his older sister who didn’t really sleep until she was seven months old 😂. He loves nursing and when Virginia gives him “Mooches” on his head. After a hard start to breastfeeding I’m happy this little chunk is gaining weight and heading in the right direction after getting the support we needed! The three hour stretches at night make me a happy Mama, too! Virginia is adjusting to sharing Mama and Daddy slowly but surely. She’s 100% obsessed with “Baby Cutie Booty” and wants to hold and smooch on him as much as possible. You were all right, your heart makes room. ♥️
1.28.20 Oliver Allen decided to arrive at 2:30 in the morning. Weighing a hefty 8lbs12oz and bringing with him the tinges of ginger hair. Virginia Claire is the *most* excited for “Baby Cutie” and we are excited it was very fast delivery and the staff has been amazing once again.