When we got engaged, my Pinterest boards rapidly began to fill with articles titled any version of “The Wedding Pictures you Need” “100 Things to Ask Your Wedding Photographer” and “The Ten Most Expensive Mistakes I Made When Planning My DIY Wedding”. Finding a wedding photographer is something we never really had to check off of our list. We have an amazing extended family member (okay, kind of a surrogate family member!) who has done everything picture related for our family in the past decade. Kim not only does stunning family, newborn, and graduation portraits–she is an absolute knockout at wedding portraiture. Add the fact that she was so incredibly affordable, and we could get copies of whatever we wanted at our own discretion, and trusting Kim to photograph our wedding was an absolute no-brainer. Besides picking our venue, picking our wedding photographer was the easiest choice we had to make.

You can see Kim’s work on her Facebook page. Tell her I sent you, she’s the absolute best!

Looking at times for Kim to be present and how long to book her expert services for was something we debated. I wanted to have all of the formal portraits for my great-great-grandchildren to see, but I also knew I wanted some random shots of people having a really good time at our reception.

Kim took all of the pictures that I “wanted”, and I adore each one of them. The ones that I continue to smile or get glassy eyed looking at, however, are the candid photographs she so expertly shot of our reception and wedding festivities. Here are the ten candid shots that mean way more to me than I ever would have imagined, and why they made this list!

“This is the first wedding I’ve ever been to. AND I got to try Sprite for the first time tonight!!” Words excitedly and eagerly spoken by my youngest cousin when I asked her if she was having fun at our reception. She and her sister don’t get to have pop, ever (meanwhile I can’t go a day without a Diet Coke hangover) and because it was such a special occasion she got to taste the forbidden lemon-lime fruit. I think this picture is so perfect, and I love seeing it on my computer!

There’s something extra special about seeing your soon-to-be husband putting the boutonniere on your ring bearer that makes you get a little misty eyed. Wyatt and Matt are constantly harassing each other when they are spending time together. One of their more recent favorite activities has been to give each other “little girl names”. For roughly eight months, any time we would see Matt’s family he would ask Wyatt if he was ready to be the flower girl in the wedding. Boys.

Matt and his sister, Emily, have always broken out into what seem to be very well rehearsed choreography for as long as I’ve been around. One of their more popular dance pieces is to Mr. Brightside by The Killers. It involves a lot of what we would call “show choir” choreography, with exaggerated hand motions completed in tandem with fancy lyrics. We weren’t married but fifteen minutes when they were sure to grace the bridal party with their #1 hit moves.

This is Tom. Tom was one of Matt’s Groomsman. Tom was definitely touched by the spirit of the party. He started dance circles (as pictured here), spun me around the dance floor, kept Matt’s hand full with a fresh beer all night, and managed to keep his tie on. Part of my favorite thing about looking at our wedding pictures is seeing how much fun Tom had. We should all live our lives more like Tom, I think.

The cutie in the black suit and blue button down is Matt’s cousin, Jackson. His Momma is the one right behind him. Jackson and I have always been quite fond of each other, but the wedding was where I realized he may be my spirit animal. Any time I’d set Jackson down for longer than three minutes, I’d look down at that sweet face and he’d be asking to be held and danced with again. How could I refuse that sweet boy? He was one of the many reminders of why choosing to have a kid friendly wedding with so many glow-sticks and goody bags was a brilliant choice. Jackson still looks at pictures of the wedding and remembers who was who, and where he was!

I had warned Matt no less than 500 times that if he ruined my professional makeup application just to get some cheap laughs from our guests, he wouldn’t want to go home with me after the wedding. However, I am the definition of “in-the-moment” living, and as soon as we approached our magazine worthy cake display everything changed. For two years I hadn’t even thought about smashing cake in his face. Suddenly, it’s all I could think about. He was too smart for that decision. He held my wrist,  and in what I imagine our guests thought was a tender moment said, “you know that if you smash it–I’m smashing it, and it will probably be way worse than what you did.” in the most terrifying voice. Just another reason he’s my soulmate, he knew I was about to go absolute crazy cake lady. I couldn’t stop laughing after he said that! Yes, I know there are two pictures for this one–but it is one singular moment. Matt’s Best Man Viral wrote the speech to end all Best Man speeches. I am almost 100% positive that this was his face right after Viral said he considered outsourcing his speech to Tom, a Groomsman. He had the best punchline ever , “It would probably be the first time an Indian man outsourced something to a White Man.” Everyone in the entire room was reduced to hysterical laughter. Viral’s speech had me spitting Mike’s Hard Lemonade all over the table, and Matt wiping tears from his eyes. Over a week later, when we received our wedding photos I sent the picture of Viral giving his speech to him. He said that he had zero idea that the glow stick was on his head in front of 250+ people. Which made me spit Mike’s Hard Lemonade all over again.

Everyone has the friend that you know would help you hide a body without asking any questions. Amy and I met in the third grade, when I was valiantly attempting to hide that my mother taught in the same building from the general population. Amy found out first, and promised she would keep my secret–then she lent me the use of her colored pencils. After that I really have no memories of my public school career that don’t have her beside me. We spent every summer night at her house, every family vacation had the other as a plus-one, and “her” family and “my” family became family. Amy moved to Florida, and has been happily living in the sunshine for the last few years. She also had just given birth to one of the most precious little girls only months before my wedding. Still, she booked a flight and was there for yet another milestone in my timeline. This was the first time I saw her, and we both immediately started crying and hugging. We used to tell people we were lungs, I was the right and she the left, because without a lung you couldn’t breathe. She’s still my lung, over 15 years later.

We had a dance following our first dance as husband and wife where all married couples entered the dance floor and only the longest married couple remained. My grandparents, Gammy and Poppy–or so some of you Wendell and Louella–won! The minute everyone in my family realized they were about to win for being in love the longest, I started to cry. My Poppy and Gammy love each other so much, and have been such an intricate part of my fabric in this life. Getting to share such a special moment of love spanning generations melted my Ginger heart.  You can tell from how excited everyone standing around us is, that we are all products of a great love story. Without them, we wouldn’t have been celebrating ours. To top it off, the way my Poppy continued to cling onto my Gammy and the look on her face makes me smile so big! 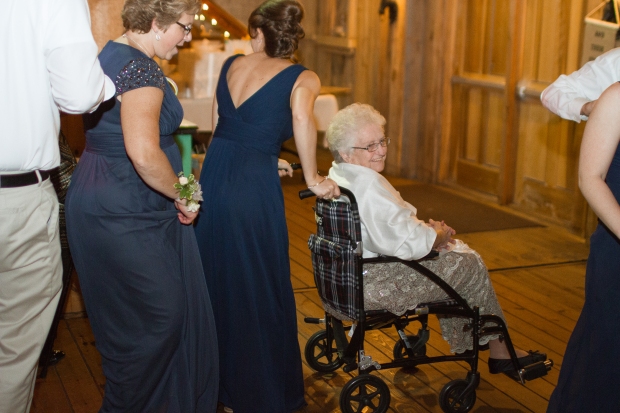 Matt and his grandmother (Mawsies!) had a closeness that would make you melt. She would tell me constantly that she couldn’t understand why I was still hanging onto him, with him being so ornery–the whole time eyeing to see if she could get a rise from him. Matt’s grandmother passed away in March, and our wedding is the last place that Matt and I can remember her feeling well enough to really enjoy herself. The entire day she was surrounded by her entire family, and was such an active part of our wedding and reception. In this picture, it was almost the end of the reception and almost everyone still at the party was *ahem* feelin’ themselves, so we requested our DJ play “Locomotion” to get extra fired up. Matt and his sister kept taking turns spinning Mawsies around the dance floor, and I vividly remember her cracking herself up watching all of us act like complete fools. She told stories of a young groom to my family members, and really enjoyed seeing him jump around when SpaceJam played. I love this picture so much. She was the epitome of a family matriarch, and I can only hope to be an ounce of the wife, mother, and grandmother she so effortlessly was.